Silver On The Tree (The Dark Is Rising Book 5)


It leaves you to think. I can't think of any better end to this review. View all 8 comments.

Silver on the Tree (Dark Is Rising, book 5) by Susan Cooper

Finally finished my yearly ish reread with this book. The whole sequence in the Lost Land is gorgeous, and probably my favourite thing about this book. It might just be that I want more, more adventures, more of the Six together, but everyone spent so much time in ones or twos rather than together. Sometimes I would have gaps of days in between my listening within a book, and gaps of weeks or even months between the books themselves, so I got a little confused. I was especially affronted by how the female characters are either air headed Jane or magical.

Why is this series considered to be so brilliant?


Despite that, I stuck it out for the entire series and was fascinated by the setting of Wales and England. I think that, given how short the books are, I will go back and re-read them at some point.

The book starts off with a sequence where Will is with his family, including his brother who is on leave from the Navy, and another brother who faces down a local bully who has set on a young Asian boy. There is a suggestion that the racism shown by the bully and his father is somehow an indication of the Dark's rising, yet I found this a bit of a muddled idea - not all the evil inflicted by human beings on each other in the past can be laid to the Dark's account.

This in the event goes nowhere and the book would not materially suffer from this whole first part being excised which is a bad sign, but I did find the occurrence yet again of an episode where Will mind wipes someone because they wouldn't be able to cope with the knowledge of the Dark's existence rather creepy and indicative that the Light is very highhanded and partronising.

In the rest of the story, Will goes to Wales where he is reunited with the Drews and Bran. They have to undergo a quest which includes various timeslips where the Signs he gained in book 2 are passed on to King Arthur by being placed within a Roman structure that is being built, and then passed back when needed, and a sequence by the sea where we see a minion of the Dark with the first name Caradog as the villain in book 4 was named who has red hair - the baddies often have red hair in this series as witness the Black Rider having it - and then a quest by Will and Bran alone into the Lost Land beneath the sea.

The trouble is that, although beautifully written and with a sense of imagery and place as ever, a lot of this doesn't make much sense and involves characters going through the motions since everything they do is predicted in a prophecy. If the Light succeeds in following the guidance of the prophecy, they will automatically prevail. The Dark, despite being the bad guys, always follow the rules even when they attempt to derail things late in the story by invoking a point of law with the High Magic - something encountered before in this series but never satisfactorily explained - and a lot of the things that happen, including much of what happens in the Lost Land is really quite pointless.

And other things, such as the racism and the repeated attacks by animals that might be mink or polecats at the start of the story, just fizzle out and are forgotten.

The Dark Is Rising : Modern Classic

The ending which I won't 'spoil' is a real anticlimax and we have the usual rather offensive idea that humans can't cope with the existence of magic and must all be made to forget - which makes a plot point where another character is given the choice of whether to remember or not just before that really nonsensical.

So I'm afraid this anticipated ending to the series was not very enjoyable. In fact I struggled to get through it and found myself turning to other books and finishing them before I could read a bit more which is why it took me about a month to read. So although I still enjoyed book 2 I have decided that they are not 'keepers' and can only award this one an 'ok' 2 star rating.

Nov 09, Jenna rated it it was ok. I really don't know what it is about this series that leaves me less than enthusiastic about reading it. I barely managed to finish this, the final book.


In fact I ended up skimming most of the second half and tuning back in only for the final battle. Throughout the whole series the story suffered from a removed and distant point of view, so I never felt anxious or sad of happy about anything that happened.

The bad guys weren't really that bad- they followed all the rules! There was even a point I really don't know what it is about this series that leaves me less than enthusiastic about reading it. There was even a point in this book where the Dark tried to stop the Light by calling them on what was basically a minor legal matter I mean, the bad guys are supposed to be bad because they do whatever the heck they want to, right? 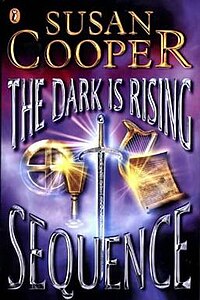 It's just not threatening at all if they follow all the rules. I could go on with everything that bothered me but I'll just say that I couldn't ever become interested in the story and I would probably only recommend this for smaller children, who would be comforted by the following of rules rather than bored by it. Aug 23, Eh? The 5th of an amazing children's series I'd read so many times over that the spine creases combined into one, big, obscuring curl. I'm saddened by the previews of the upcoming movie where it appears the lilting beauty of Cooper's story has been fed steroids and 'enhanced' with explosions.

What's this about an American protagonist rather than English, and no mention of the Arthurian connection? The horrors! View all 22 comments. Jul 29, Jessica rated it really liked it Shelves: middle-grade , own , fantasy , king-arthur. I never read these as a kid, though I was aware of them. I read them as an adult, and I remember the entire series as a whole. I think I'd like to read them aloud to my kids, once we finish Harry Potter.

Mar 11, Jess rated it really liked it Shelves: fantasy , juv , arthurian-legend , audiobook , reread. A satisfying conclusion to the series. I realized, listening to the books, that they're not so much about what happens as about the tone, the sense of place, and the way that good and evil work themselves out in the world.

I couldn't really tell you the plot of this one - the Dark is rising again and Will and the others are trying to stop it?

And these are smart kids - they go off and do things on their own, and are responsible and capable but also very much children. They don't act in a way that says, "oh, grownups can't figure it out so we have to, clever us," since they often do need the help of grownups. But the adults trust them to do things on their own - whether it's going for a walk in the mountains or saving the world from the Dark. You might be able to enjoy this as a stand-alone, but I'd really read the rest of the series first - start with Over Sea Under Stone.

Squeaked this in just before began. There's little more I can say about this book: I don't understand people who don't like it, who can't see the layers of ambiguity in it, the way there's always more to discover. Mind you, I'm sure it's partly me that brings that to this most loved story. I love that Susan Cooper's people are people, most of them neither Dark nor Light but people, trying to live. I've needed a Stephen Stanton in the past, and Susan Cooper reminds me -- as Will is reminded b Squeaked this in just before began.

I've needed a Stephen Stanton in the past, and Susan Cooper reminds me -- as Will is reminded by his family -- that people like him do exist. There's nothing impossible about the human characters of her books.